Yesterday me and my friend, Isaac, went to the Ohio Comic-Con at the Columbus Convention Center.  So I figure I’d give a recap.

So I’ve never been to a comic-con before.  I don’t really know what I was expecting.  I’ve seen Morgan Spurlock’s comic-con documentary (me and Isaac actually watched it the night before in preparation).  All I can say is that it felt like an overload of the senses.  At any turn you see people in costumes from some obscure anime to about a dozen or two skinny guys dressed as the eleventh doctor.  It’s so overdone.  Seriously, who dresses up as him thinking it’s original? 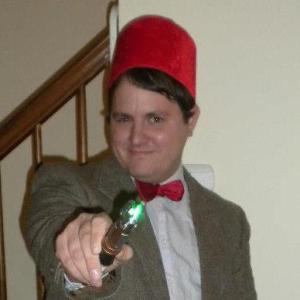 Oh, and the merchandise!  Lot of fun exclusives (including a Walking Dead comic that you can only receive there), as well as t-shirts with the green power ranger on the front.  The green ranger was in attendance and I didn’t photograph him because he looks like he could rip someone apart.

In the back section of the main room is the photograph/autograph section.  This is where fans that have the knowledge to make elaborate costumes don’t have the knowledge to realize $150 might be quite the high asking price to have an awkward interaction with Norman Reedus as he writes his name onto a piece of paper.

Me?  I’d rather meet a celebrity in a chance encounter.  Which sort of happened.  Sort of.  Me and Isaac were heading towards the autograph booths to get a closer look at Sean Astin.  There was a clear line of sight between us and Sean Astin and I thought it was an opportune time to start chanting “Rudy!”  However, on our walk over to Samwise Gamgee, two people to the left of us cut in front of us and didn’t break their stride as they walked to our right.  One of those people?  Scott Wilson.  Better known to some as Hershel from The Walking Dead.  So yeah, I wish I could tell you the story of how I ran into and collided with the star, but it didn’t happen.

Another fun aspect of Comic-Con are the panels.  They’re also free with admittance, so of course we had to check that out.  On the docket for this day?  Ray Park (Darth Maul, Toad from X-Men), Michael Rooker (Merle from The Walking Dead), Ernie Hudson (Ghostbusters), Grant Wilson (Ghost Hunters),   and Sean Patrick Flannery (Boondock Saints, Dexter).  These were all back-to-back and were about 30-45 minutes Q and A sessions.  We didn’t want to be sitting for that long (we had merch to buy), so we sat out Ernie Hudson’s Q and A (Sorry Mr. Hudson).

Ray Park was one my favorites.  Very humble guy and it was obvious he loves his stunt work and getting to work with some larger-then-life actors like Sir Ian Mckellen and Ewan Mcgregor.  He had a lot of behind-the-scenes stories.

Next up was Michael Rooker.  He has a strange energy.  He loves himself and the fans love him.  So I guess that all works out?  In front of us were some girls wearing “Merle Dixon,” sports jerseys or something.  One spoke with a southern accent.  Another loud girl behind us also spoke with a twang.  There seemed to be just as much (if not more?) love for the character of Merle then for Michael Rooker.  I guess that’s fine, but that character was a villain of sorts for the most of the show not to mention a loud, racist.  So that was an awkward panel.  At no point did the questions veer into other territory such as his work with James Gunn (Slither, Super, Guardians of the Galaxy).  So that was kind of a bummer.

After Rooker’s panel, we took a break and walked the floor and grabbed some grub.  Food wasn’t super expensive, but it also wasn’t good.  So that evens out I guess?  Also I bought a Firefly hat.

After spending some cash, we spent time at the panel for Grant Wilson, formerly of Ghost Hunters.  Those that know me are aware that I believe in ghosts.  My parents’ house was haunted, okay???  I’ll give him credit, if the events on that show WERE fake, he wasn’t in on the staging of events.  He had some fun stories about pranks they pulled on Donna (poor Donna), as well as a couple of stories from his teens that got him interested in the paranormal.  Also, I took about a dozen photos of him and each face was weirder then the rest. I gave up after awhile. 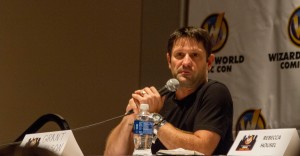 Finally, we attended Sean Patrick Flannery’s panel.  Easily the best of Sunday’s guest.  He was energetic and seemed to be having a great time.  He went on some wild tangents with the Q and A section.  He told stories from Boondock Saints, Young Indy, and working on Dexter.  He even did an Irish accent for the Boondock Saints crowd.  Although most of these guests seemed like nice people, Flannery was one of the few I could wanting to grab a pint with fan afterwards. 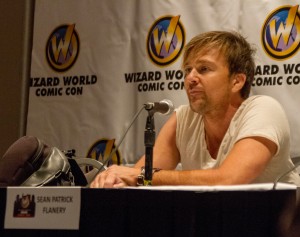 So we went back to the main floor after the panels and got various photos in front of nerdy cars from nerdy shows/films. 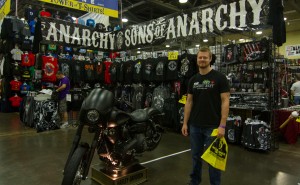 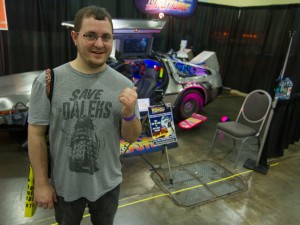 As we walked up and down the aisles, we came across a booth for Cyanide and Happiness.  Those unfamiliar with C&H, they’re a daily webcomic that I absolutely LOVE.  Two of the artists were at the booth and if you purchase any item from their booth (ranging from $5-$40), they would draw you a custom illustration.  Of course I couldn’t pass this up.  I purchased a plushie of one of their character (a dead one with X’s for eyes and a big smile, of course).  As I walked over to the two artists, I realized all of these custom illustrations were based on what the customers were pulling out of a box.  One of the artists told me to draw 2 to 3 pieces of paper from the box.  I pulled out one piece of paper that said, “shark.”  The next?  Slim-Jims.  I got Isaac in on this paper-pulling fun and he drew “viagra.”  The guy laughed as I placed the papers on the table and furiously started to draw things like he was bewitched.  Here is what he came up with.

The other artist drew the shark penis saying that it only made for it to also have a fin on it.

Here’s a short video of the floor and panels.  I didn’t film a lot of the panels because I didn’t want to draw attention to myself.  Not that cameras weren’t allowed, but I didn’t want to film a celeb that didn’t want to be filmed.  I’d hate to see an enraged Michael Rooker.

Also, in LG related news, I won’t be posting on here as often starting this week.  As of now, I’ll only be posting Monday and Friday.  I’m getting closer to another screenwriting competition deadline (10/15) and so much of my attention is focused on that.  Cheers!