Today is Wednesday.  For those from Bellville, Ohio, that can only mean one thing.  FAIR WEEK.  The week where everyone from Bellville return to the town to meet with friends and receive the latest gossip of other town dwellers.

Town fairs have played their part in the world of cinema.  Listed are my top 3 movie scenes (based purely on what has clips on youtube) at a fair and reasons why you would (or wouldn’t) want to attend:

The Scene:  No real setup is needed for this scene.  The kids go to the fair and get into some shenanigans.  Puking shenanigans (also this was the only video I found of this scene, and all of the voices are dubbed over, but you get the idea). 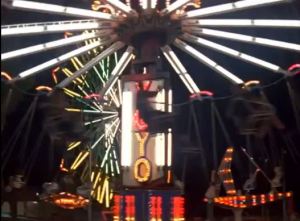 THE BAD:  Fun rides with puke on them! 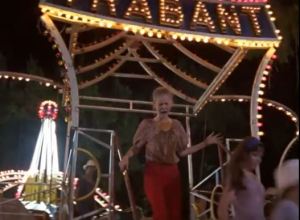 2.  Strangers on a Train

The Scene:  Bruno and Guy, two strangers that met on a train, formulate a plan……for murder.  Bruno will kill Guy’s abusive wife, while Guy will kill Bruno’s father.  Things don’t go as planned and Guy back out of the deal, but Bruno has already fulfilled his part of the arrangement.  Seriously, check this movie out if you haven’t.  Anyways, the story culminates in a fight…on a carousel?!

THE GOOD:  There’s a Tunnel of Love to ride with that special someone.

THE BAD:  Carousel operators sometime get shot for comedic affect.

And only one week from retirement!

The Scene:  Danny and Sandy met over the summer.  After singing about it, they try to find out if they can rekindle that love.  Well of course they do.  At the end of the film they enjoy a day at the fair and we realize that Danny and Sandy really DO go together like rama lama lama ka dinga da dinga dong.

THE GOOD:  Everybody is so busy dancing that the line for rides are probably really short.

THE BAD:  If you drive your car on the fairgrounds, it will fly into space and you will die.

Should I be worried?  Cars normally don’t do this.