So I was struggling on what to write today, and then this news story hits.

Ben Affleck will be the new Batman. 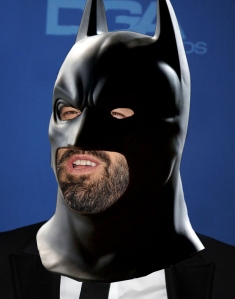 Yep, the star of Gigli will be playing the dark knight in the Man of Steel sequel set for theaters in 2015.  Affleck has currently starred in the Marvel universe as Matt Murdock, aka Dardevil.  So this is a similar play by Warner Bros. to when they grabbed Ryan Reynolds, who played Deadpool in the Wolverine prequel, to star as Green Lantern.

Which turned out as terrible as everyone has told you.

So what’s my thoughts on this casting choice?  Meh.  Perhaps this will come as a welcomed surprised much like that guy from Ten Things I Hate About You did in The Dark Knight.

Let’s put a smile on that face!

Personally I feel that Warner Bros. is playing it safe.  Instead of choosing a lesser known actor to dawn the cape, they chose an actor that, regardless of how terrible the film he’s in, will bring the studio substantial money.

This choice is in line with rumors circulating earlier this year of the proposed Justice League film.  Whereas Marvel Studios have made some peculiar choices with directors (Whedon, Gunn, writers from Community), Warner Bros. has tried to play it safe.  Before this Man of Steel sequel was announced, all attention was on this Justice League film and who would direct.  The names on the short list?  Brett Ratner (Rush Hour 1-9), McG (Terminator Salvation, Charles Angels), and Roland Emmerich (Day After Tomorrow).  These are all directors who know how to make crappy summer films, but somehow bring in a ton of money.

I wish Warner Bros. would make some bold choices like Marvel Studios has.  Instead they choose an actor that has name recognition and not all the talent (excluding directing, obviously).  Again, I could be wrong and Warner Bros. sees something in Affleck that would make him a good choice for the caped crusader.  But yeah, I don’t see it.  Proof me wrong, DC.

And to leave this short rant, here’s a few clips of lesser known portrayals of Batman (and no, I’m not including Clooney and his bat nipples):