First off.   Yes, I’m VERY proud of that title.  I feel like I just need to get that out of the way.

Second, I just finished watching Jaws on Blu-ray.  Holy hell does that movie hold up.  I haven’t seen the whole movie in maybe 10 years.  No joke.  It’s just always on TV so I catch pieces here and there and never felt the urge to purchase the film and make a night of it. It’s kind of like someone purchasing The Goonies.  Seriously, what the hell are you doing?  I’m pretty sure it’s on TV right freakin now.  You can get your Sloth fix FOR FREE.  Check your local listings.

Let’s get back to Jaws.  This movie came out in 1975. NINETY SEVENTY-FIVE.  I was, what?  -10 when it came out?  Something I notice now is how well the effects hold up.  How is it that a fake shark from a movie nearly 40 years old looks so great and newer shark films still look cheap?

Tara Reid also looked fake, but let’s save that for another post.

WHY HAVEN’T WE ADVANCED FURTHER IN FAKE SHARK TECHNOLOGY?

Jaws still holds up because they didn’t have CG for everything back in the day.  Movies like Avatar look great now, but in 20 years it’ll look as dated as that Godzilla film from the 90’s.  Seriously, rewatch that.  Actually don’t.  It’s bad and they should feel bad for making it.  Also, just like The Goonies, it’s ALWAYS on TV for some reason.

Let’s just pretend that guy is the director.

I feel like someone’s grandpa.  “You kids don’t know about the movies!  Back in our day if we wanted to film a super hero, we would pour toxic waste on someone and pray we get something out of it!”  Then the grandchildren would get on their hoverboards and fly away from the nursing home.  I will look out the window and shed two tears.  One for missing the simpler times, and the second for wishing I grew up with hoverboards.

That said, I did LOVE The Avengers.  CG is improving and I’ll go see anything Marvel Studio throws out, but if there’s something in the film that can be built, and look more authentic, why not just build it?

They’re probably not even wearing pants.

I just wish we’d we see more filmmakers creating sets and miniatures instead of relying on green screen and the abilities of the latest animation software.  Don’t worry, grandpa is almost done talking.

We are seeing some shift in CG vs. practical and that’s groovy.  Christopher Nolan builds insane sets whenever possible.  Here’s a vid showing some of the construction of the spinning hallway.  Kathleen Kennedy, current head of Lucasfilm, recently said they were to focus more on practical effects for their current slate of Star Wars film.  I guess I’d like to see more of what these two are doing.  A heavier emphasis on the practical and the use of cg when creating something that can’t be done practically.

Okay, grandpa is done talking.  I thought of this post/rant when going through some old bookmarks of behind-the-scenes photos from some of my favorite films.  So I selected a few to post.  Enjoy.

Just realized a robot shark is MUCH more terrifying then a real shark. Sharkinator? Okay, that’s mine, you can’t use it. 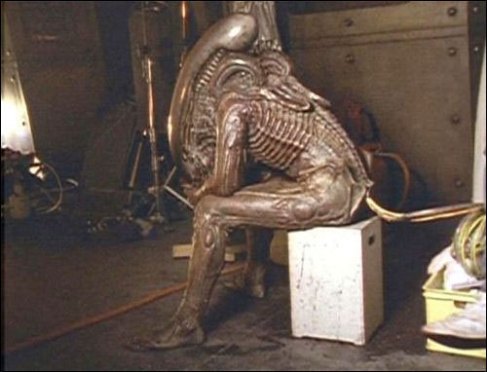 This role is completely alien to me…(rimshot)

Hey can you scratch me right…ah, yeah, that’s great, thanks.

Day Man, fighter of the Gremlins. 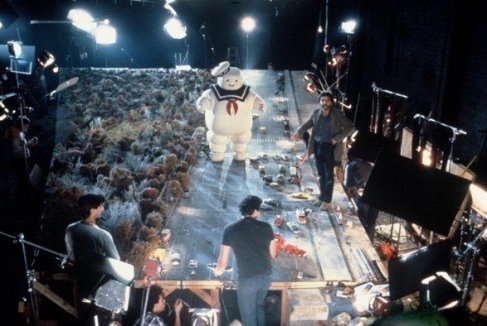 I uh..no joke here, I just really like this photo. 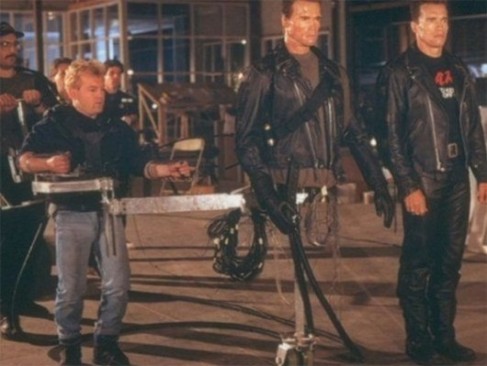 So realistic, you can barely tell which one is the real Arnold!

This guy is also the one responsible for making Gumby move. Again, not a joke, just a fun fact. I’m not a joke factory ya’ll.

Wait. So they’re NOT real?

This is less “practical effects at work,” then a fun photo I found of Tim Curry being awesome.